When you travel along King Street today, you eventually come across the beautiful Flagler College. It is a gorgeous set of buildings, immaculately taken care of, and has a thriving student population. But long before it was a college, it was the dream of millionaire businessman, Henry Flagler.

Henry Flagler had taken his second wife on a honeymoon to Jacksonville, Florida and further south to the seaside village of St. Augustine (the oldest permanent European settlement in the United States). Flagler loved the breathtaking expanse of sea and shore, and enjoyed the clear skies and balmy weather when most of the rest of the country’s residents were locked in by ice and snow.

St. Augustine had been used by invalids even before the Civil War but wealthy northerners were just beginning to discover its balmy weather at the end of the nineteenth century. While the Flagler’s’ stayed at the new six-story San Marco Hotel they were surprised at the lack of large hotels and other real estate development. After consultation with the owner James A. McGuire, his hotel manager Osborn D. Seavey, Dr. Andrew Anderson, a St. Augustine resident and Franklin W. Smith, a Bostonian, Flagler decided to build a new hotel. He later recalled the difficulty of deciding on the design of the Hotel Ponce de León, “Here was St. Augustine, the oldest city in the United States. How to build a hotel to meet the requirements of nineteenth century America and have it in keeping with the character of the place – that was my hardest problem.”

Flagler went to McKim, Mead & White of New York, the leading architectural firm in the United States, and hired two young architects: John M. Carrere and Thomas Hastings. The 540-room Ponce de León Hotel opened on January 10, 1888 on a five-acre lot with Spanish Renaissance architecture. On opening day, the invited guests arrived on the first sleeper/vestibule train ever to arrive in St. Augustine. That evening, Mr. and Mrs. Flagler entertained the hotel’s architects, builders, artists and railroad executives. The first impression of the Ponce de León was of size, since the mammoth structure covered most of its five-acre lot. The building was only four stories high but it was large and extensive. Inside the front gate was the beautifully landscaped 10,000 square foot interior court containing a large fountain with a grand entrance to the rotunda. The building’s design and ornamentation embodied the style of Spanish Renaissance architecture.

Rare footage of the Ponce de León Hotel taken in 1926:

The heartbeat of the hotel was in the spacious rotunda. Its great dome was supported by massive oak columns and its floor was brilliant with inlaid colored mosaics. The architects tried to capture the spirit of Old Spain with allegorical representations of the four elements: fire, water, air, earth and four figures: adventure, discovery, conquest and civilization. Behind the dome of the rotunda was the oval-shaped dining hall seating 700 with stained glass windows, highly polished floors and enormous columns of antique oak. The ceiling art representing the history of St. Augustine was painted by Virgilio Tojetti, one of the foremost artists of the day.

“The hotel had electric lights, steam heat, private parlors, reading and game rooms, exquisite draperies, imported rosewood, walnut and mahogany furniture and Brussels carpet. Since standards of the day deemed public bathrooms sufficient, the hotel originally had only one private bathroom – in Flagler’s suite. Almost immediately after opening it became necessary to add private bathrooms to the hotel rooms.”

The Ponce de León was the center of formal entertainment dances. One of these affairs was the Hermitage Ball held in 1892 to raise money for the restoration of Andrew Jackson’s Tennessee home. There were swimming exhibitions at the Casino pool, horsemanship tournaments, bicycling and tennis. In 1895, the first golf links were laid on the Fort Marian green and there was great interest among the winter guests in golf equipment and professional instruction. In a manifestation of Jim Crow racism, guests would sometimes attend cake walks performed by the Negro bellhops and waiters. The event would being with a “buck dance”, a brisk double-shuffle by one black performer followed by singing and the cake walk. Well-dressed white couples would then stroll in time to the music and vie for prizes awarded by a panel of judges of their peers. Later, cake walks were replaced by black-faced white performers in minstrel shows.

In order to attract modern vacationers so soon after the Civil War and Reconstruction, Florida had to remake its image. After all, Florida was the third state, after South Carolina and Mississippi, to secede from the Union. Throughout the post-Reconstruction period, the Ku Klux Klan and other terrorists organizations brutalized black landowners and officeholders with lynchings, murders and arson. As late as 1873, Harper’s Weekly reported that Florida was “suited for cultivation as a resort… but for its ceaseless political disturbances…. In St. Augustine, Henry Flagler’s choice of Spanish Renaissance Revival design for his hotels was not accidental. It solidified the city’s claim to Spanish heritage and helped to stimulate tourism by erasing memories of Florida’s participation on the Confederate side of the Civil War conflict. Founded in 1565, St. Augustine had Spanish origins and was known as “the Ancient City”. Flagler could, therefore, be a modern-day Ponce de León rather than a carpetbagger and promote Florida as a more desirable vacation destination for Northerners.

The George Maynard paintings and murals “Adventure, Discovery, Conquest and Civilization” in the ceiling of the Ponce de León’s rotunda and dining room reflected the history of Spanish Florida, not the history of slavery or of racist sectional strife. There was no place in this selective history for slaveholders and secessionists but only dashing Spanish explorers. The “Change of Flags” segment for a local festival included Spanish, French, English and American flags but not the Confederate flag.

The management of the Ponce de León had to provide housing for the hotel employees. Behind the main dining hall was a large building which contained the kitchen, workshops, living quarters for the hotel’s white employees and several employee dining rooms. A quarter of a mile away on Cordova Street, black males were housed in the so-called “colored barracks” while black women lived in the large laundry building near the railroad depot. A variety of other skilled employees worked in the Flagler hotels: plumbers, gardeners, chefs, musicians, engineers and two Pinkerton detectives to protect wealthy guests from “bunko” artists. Most of these employers worked in northern hotels in the summer and in southern resorts in the winter.

In 1899, Flagler built seven studios in the rear of the Ponce de León which were occupied by famous New England painters whose landscapes promoted Florida to the rest of the country. The weekly receptions and exhibitions held by the artists were among the social highlights of the winter season.

In 1963, the hotel was one of several St. Augustine sites involved in the civil rights movement. Vice President Lyndon Johnson was invited to attend a banquet to launch the celebration of St. Augustine’s upcoming 400th birthday as the nation’s oldest permanent European settlement. Dr. Robert Hayling and other civil rights activists protested the exclusion of blacks from the event, and after negotiations, two tables were set aside for local black residents.

In 1964, the city became a national stage for demonstrations that brought Dr. Martin Luther King to town. On March 31, 1964, more than a hundred students from the all-black Richard J. Murray High School marched to downtown and sat-in at the elegant dining room of the Ponce de León Hotel. They were met by police with dogs and cattle prods and arrested. It was the first mass sit-in of the civil rights movement in St. Augustine, and it was reported the next day in the New York Times.

In 1968, the hotel was converted and became the centerpiece of the newly-established Flagler College. Beginning in 1976, with the nation’s bicentennial anniversary, Flagler College embarked on an ambitious campaign to restore the hotel and other Flagler-era campus buildings. In 1988, the College celebrated the centennial of the hotel, and a decade later students created the Flagler’s Legacy program which provides guided tours of the hotel to thousands of visitors annually.

The Ponce de León was added to the U.S. National Register of Historic Places in 1975, and became a U.S. National Historic Landmark on February 21, 2006. source

Saint Augustine Is A City Like No Other, Come See It For Yourself

Enjoy The Sights And Sounds As You Shop, Eat And Have A Blast On Saint George Street

During the week, I am the Creative Director for Mudflower Media where we design and build mobile-ready websites like this one. On the weekends, you will find me somewhere in beautiful downtown Saint Augustine, working on my next delicious restaurant review or cool place to try. 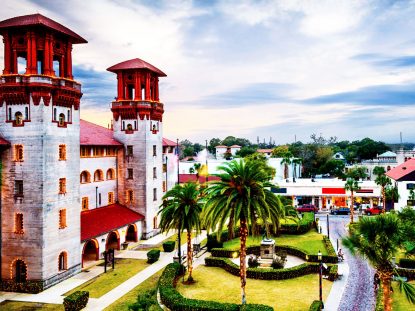 Saint Augustine Is A City Like No Other, Come See It For Yourself