A monument not only of stone and mortar but of human determination and endurance, the Castillo de San Marcos symbolizes the clash between cultures which ultimately resulted in our uniquely unified nation.

The Castillo de San Marcos is unique in North American architecture. As the only extant 17th century military construction in the country and the oldest masonry fortress in the United States it is a prime example of the “bastion system” of fortification, the culmination of hundreds of years of military defense engineering.

It is also unique for the material used in its construction. The Castillo is one of only two fortifications in the world built out of a semi-rare form of limestone called coquina (The other is Fort Matanzas National Monument 14 miles south)

The fortress itself is both a product of and evidence to the multitude of forces both political and technological that created the competition for empire during the colonial era. But above all the Castillo is an enduring legacy of the craftsmanship and skill of the engineers, artisans and labourers who built it.

Not only can you take a really cool tour throughout the Castillo – affectionately known as “the fort”, not to be confused with Fort Matanzas – you can also rent out an area of it for parties and weddings. We have watched 4th of July fireworks there for the past 5 years, and every weekend in the summertime it’s mobbed with people enjoying it.

The wonderful restaurants and shops of Saint George Street are right across the street, so it’s perfect for an afternoon with the family, a romantic first date, or just to get out and get some fresh air. My friend Steve and his fiance are getting married there in January.

It really is an amazing place, and you need to check it out.

Enjoy The Sights And Sounds As You Shop, Eat And Have A Blast On Saint George Street

Grooving On Gourmet Popsicles At The Hyppo Can Be Quite Addicting

During the week, I am the Creative Director for Mudflower Media where we design and build mobile-ready websites like this one. On the weekends, you will find me somewhere in beautiful downtown Saint Augustine, working on my next delicious restaurant review or cool place to try. 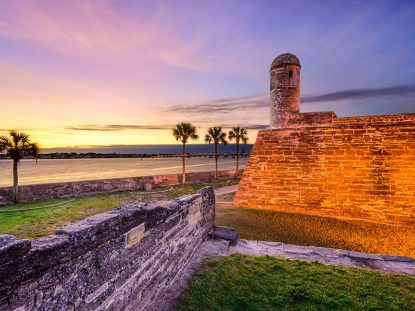 8 Amazing And Historical Facts You May Not Know About Saint Augustine, Florida